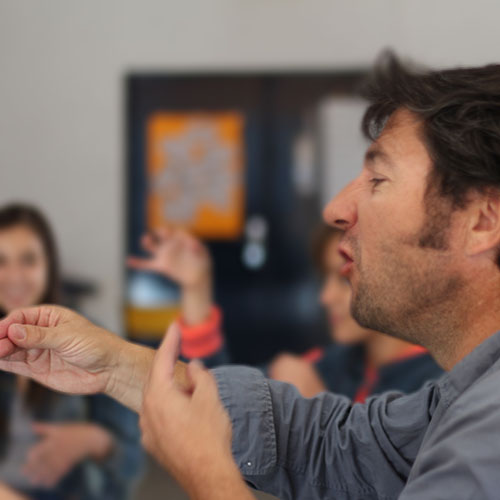 The French through mime workshops given by Fabrice Eveno and Cyril Gourmelen start this week with allophone pupils from secondary school Le Breil.

This is a very special edition as this year marks the 10th year which Graine d’Europe, Fabrice, Cyril and Pierre Berger (teacher, allophone department) have worked together.

Allophone? Teenagers, aged 11-16 who don’t speak French upon their arrival in Nantes. Whatever their background, they’ve all got spirit, they’re passionate and eager for new discoveries…. But it’s not easy as a young person when you can’t meet people using your own language, to understand people, to be part of a group….

So for 10 years, for Pierre Berger, it has been particularly important to offer each group of pupils the chance to communicate through mime: “It helps them settle in, helping them meet people first through mime then through words”.

Fabrice Eveno is an actor and Cyril Gourmelen a teacher, and they are both trainers: “It just seemed to us, and this is what our educational approach is based on, that the particularity of drama without speech, mime, is that it is a great way of getting language beginners, young and old, involved. A person can speak through body language, through their breathing or their own rhythm, using sounds they can make with their body. This way, the fear of speaking, the fear of making “mistakes”, the fear of coming across as “ridiculous”… as well as missing the necessary vocabulary or grammar which is usually part of learning a new language, can be softened using this “body language” which is much more reassuring.

Over the past 10 years, the French through mime workshop, funded by the City of Nantes through the Contrat Educatif Local programme, has helped nearly 200 allophone pupils who have recently arrived in Nantes to spend a relaxed transition year before they go on to carry on their education and choose a career path.